In tourism there is a continuous claim for innovative products and services. In Denmark, the small and medium-sized coastal towns are hotspots of very important tourism resources. They contain a range of services, such as restaurants, shopping facilities and attractions. Many of them represent a cultural heritage, and there are enjoyable and picturesque city centers, historic houses, churches, harbors, parks etc. Coastal towns’ harbors are key visual and structural elements in the townscape. However, the economic importance of the harbors has been declining, and new use of the waterfronts is suggested and implemented, among others for the benefit of tourism. Simultaneously, the climate development is a distinct challenge for the harbor space in coastal towns, and the risks of flooding are rising. If not addressed adequately, climate change is likely to have a long-term damaging effect on tourism and destinations. 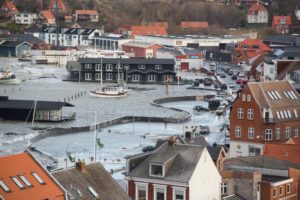 In order to maintain the townscapes and the facilities both for tourists, citizens and enterprises and to respond to climate change, there is increasingly an emphasis on climate mitigation and adaption. In built environments it has to happen in close conceptual and functional coordination. The mitigation and adaption activities are found to stimulate technical and functional innovations, which also take into consideration that stakeholders in the townscapes must operate in new ways. Hence, innovation in tourism also regards a range of governance mechanisms. Such innovations are changes in content and methods of rulemaking, rulesetting and rule implementation. They are innovations in the way that actors make something happen and the way that they change incentives. Governance innovations can embody new approaches for institutions to be built and modified, and they can include new arrangements that rearticulate the state-civil relationship, thereby repositioning the meaning of citizenship (Swyngedoduw, 2005).

Lemvig is a coastal town in Denmark, beautifully located in the bottom of the Limfjord. It is in the immediate hinterland of the west coast’s touristic zones, and a popular place to come for shopping. The fjord accommodates for recreational sailing and water based events. Over the past decades the use of the harbor for transportation, fishing and industry has declined. The large central area closest to the city centre has been an open space mainly used for car parking. This area is a particular risky zone for flooding. In the 2010 harbor plan the municipality recognized that the flooding protection already was and in the future definitely would be insufficient. 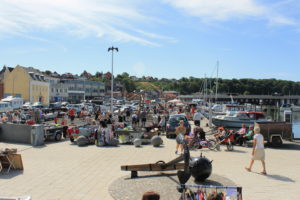 In 2012 a project was initiated with the purpose of unifying the city development and flooding protection – for the benefit of tourists, citizens and business enterprises. The architect came up with a design of a 350 meters long wall that wrings its way along the harbor. The wall is supplied with gateways that, in times of no flooding risks, remain open, but can rapidly and automatically be closed if necessary.

The municipality is the owner of the harbor space and of the infrastructures. The municipality was the leading actor in the entire transformation process, and it financed the construction work. However, many others took part, not the least members of the Harbor Council that organizes business and leisure users of the harbor. The Habor Council is an informal advisory entity for the municipality. Participatory processes with larger groups of citizens were organized as essential strategy to mobilize the development of knowledge networks, but also to legitimize the changes on the harbor. The processes generated and importantly communicated knowledge that is relevant, credible and co-produced by stakeholders. DGI, the national sports association, undertook, on a co-creative base, feasibility studies of the opportunities of the use of the areas for a variety of sports. A lot of ideas emerged, also such ones that could be attractive for additional numbers of tourists.

In the specific and detailed design process, the architect invited groups of 12-years old school children to design the plates in the wall that cover the locking mechanisms. The designs were produced in ceramics, the children were enormously proud of their achievements. The benches were produced in a school for rootless youth, and also in this case their commitment was very visible. The hope is to create a genuine attachment and ownership, but also to diminish the risk of vandalism.

The wall efficiently shields the space from traffic. Tools for playing have been added, and that has created a place for children’s enjoyment, and for strolling and gazing. The design qualities of the place have benefitted the restaurants and shops in the immediate vicinity.

After the inauguration, the renovation has shown its worth in a wider sense. For example the space has been taken in use for markets, concerts and other events. For the first time, a crab festival will be launched in 2017. In the branding of the town the harbor is more crucial than ever. Food activities will be one strand of branding, climate issues another. The wall is, in its own respect a showpiece, helped by the fact that the design won the “Concrete Price”. Delegations of professionals come to Lemvig to learn about climate adaption, and this is an important way to increase a touristic awareness.

Ideally, destinations, businesses, and tourism organizations should thus seek to address mitigation and adaptation simultaneously. In Lemvig, the municipality is the lead actor. On the daily base, the handling of the use of the space has been outsourced to the tourist association, with the event manager as a primary actor. The event manager is supported jointly by the 2 retailers’ organizations, the tourism association and the municipality. He ensures coordination with other activities. A fee is collected from commercial users, and this funding is added to the tourist association’s budgets. The maintenance is on the hands of the municipality.

In 2016, the municipality obtained support from Realdania, a large foundation stimulating urban refurbishment and visionary development, for an extension of the recreational facilities on the other side of the harbor. A large skating area has been added. The town has become eager to speed up renovations in several places, learning from the good experiences. A small slipway and blacksmith enterprise will be moved to another location on the harbor, and the endeavor is to ensure that the business can thrive safely in its new location. However, it is also about giving visitors on the harbor the possibility to “gaze” on whatever happens in the enterprise. 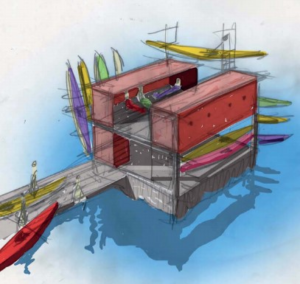 During the creative processes with DGI, many ideas for projects came up. Floating kayak sleeping-bag shelters was one of the ideas, still to be implemented. Installations like this raise further questions about governance and regulation and will, possibly, demand innovations in this respect. The harbor water surface and harbor land territory in Lemvig belongs to the municipality, but the sea territory is nevertheless co-regulated with the sea and coastal and shipping authorities. Changing the use from transportation to something like housing or recreational facilities will require a change in the planning of the specific area. The Danish guidelines for planning issued by the ministry make is possible, under very specific precautions, to use the sea territory for floating installations such as kayak shelters, restaurants etc. There are building regulations related to floating objects, addressing issues as safety, technical supplies, materials, onshore facilities etc, and the municipality is responsible for the planning process. There is a certain reluctance to work with installation that bridge land and water, as the planning is complicated. Municipalities might want to own the facilities and make them available for recreational use, so as to be able also to shift the use, if either the needs or the climate situation should change in the future. If private enterprises or leisure associations take possession as tenants, they need to sign a contract and pay a quayage. The length of the lease has to be determined.