Businesses both big and small are flocking to social media platforms such as Twitter, Facebook, YouTube and Foursquare. A presence on these media not only allows companies to engage in conversations with consumers, but also serves as an outlet to drive sales through deals and coupons. Analyses by Center for Excellence in Service at the University of Maryland indicate that social media adoption by North American SMEs have doubled from 12% to 24% from 2009 to 2010.

Joie De Vivre which operates 33 small boutique hotels in California uses Twitter to drive sales and marketing. The 12,000 followers will each Tuesday get an exclusive deal for hotel rooms or restaurant services. The company works with event makers in order to keep a constant stream of followers. This is important, as most people using Twitter are not in it for commercials alone. Driving forces are the contact with other people, exposure to interesting opportunities and activities. For example Joie de Vivre took the initative to donate prizes for competitions such as the Road Trippin’ California Video Contest, which asked people to submit videos on YouTube that share why they love California. Three winners, out of 270 videos that were submitted, were selected to win an all-expenses paid California road trip with stays in the company’s hotels. 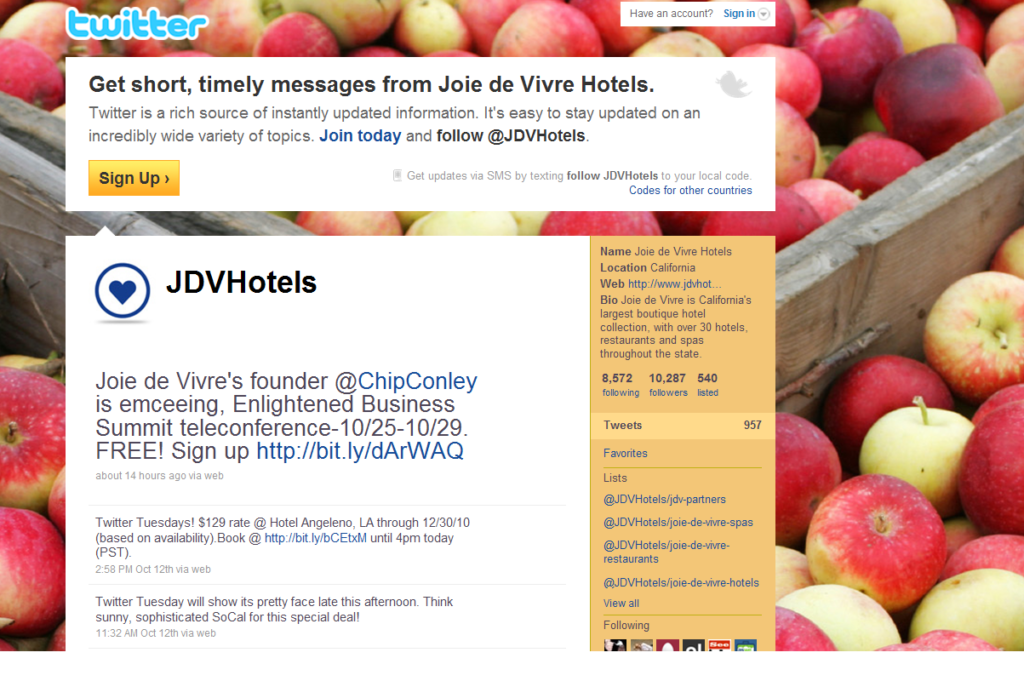 During the economic crisis, the hotel industry’s marketing budgets shrank, and social media proved to be a great way to both drive sales and build loyalty. That is also the case for Joie de Vivre.

Each individual hotel manager is responsible for monitoring conversations and reviews on Twitter and other social media.